NOTE: The first blind (in the lounge) is intentionally disconnected: it doesn't slide properly, and it will only get worst if it is still controlled. Also, the last blind (near the soldering table) is disconnected: I guess the chain slipped off and it doesn't durn. I'm going to try and fix it: To be continued.

Before starting to tear things apart, make note that the hire contract states that we are not allowed to make changes (i.e. structural) to the building. Therefore we need to inform the building manager what needs to be done to fix the blinds, first. Contact one of the board members, or Xopr before grabbing the soldering iron ;)

The space has 8 windows with a width of a little less than 1.80m per window, each with a motorized window blind mechanism. This is an opportunity to automate this system to our needs.

Last time, eracoon and CoolePascal were helping out, so they deserve credits here (correct me if I'm wrong :)

The stuff works more or less. Now it's time to optimize/automate.

Some ideas to work out:

Describe your plans on the discussion tab, so we can execute them here

Unfortunately, the cables are cut, probably somewhere in the basement, by estimating where the signaling cable leaves; you can see the white cable going into the metal conduit on the far right side of the windowed wall. It then goes down left of the second last concrete pillar, where it disappears.

Each blind has its own transformer right behind the motor on the right side of the window, labeled as a 12v 1.3A (it's an unstabalized one), which plugs into the system as a 3.5mm jack plug (be *careful when unplugging* this, because jack plugs short momentarily) 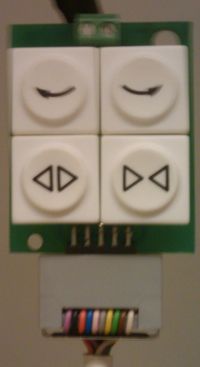 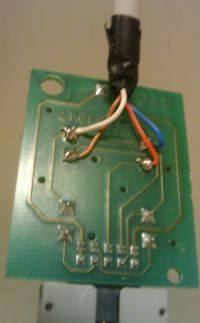 The buttons work as followed: 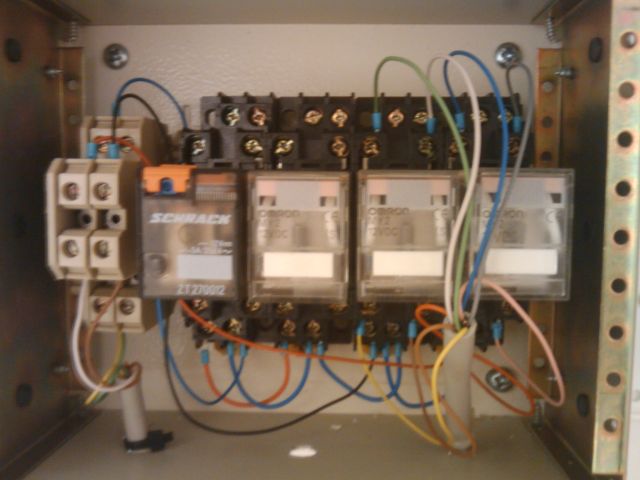 The turn left/right buttons were extended to a relay box

(come to think of it, they start rotating upon a pulse, which will eventually close them, so this setup is at least peculiar.) Stoney3K suggests this setup is a cross-linked set of 12VDC relays in a set/reset flip-flop configuration, meaning the relay will latch when you push the 'close' button, but release once power is disengaged through the motor control or end stop switch.

This unit is missing a (fairly common, 12VDC) power supply. The current rating is marked on the socketed relays.

The blinds open up from the center. Note that the string at window 4 is fubar: better not use the open function because you won't be able to close it anymore. To demount the blinds, do the following 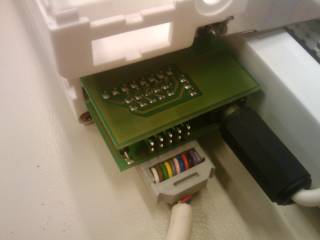 The top connector (close to the ceiling) is used as input, while the bottom header is connected to the next set of blinds. 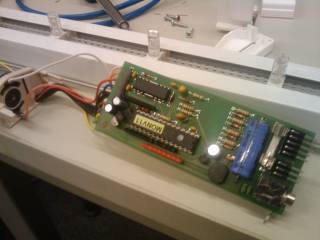 The PCB has several easy identifyable components on it, for example:

Also, the unit has two DC motors and 4 end-detectors (microswitches)

Warning: colors are not verified yet, but are plausible to be correct. The current colors might need swapping in pairs of two, due to the layout of the box header.

Also, timings can be off, but are reasonable guidelines.

From the relay box, the rightmost relay connecting the blue and orange wires do the 'clockwise' turning, while the second right one (using white and brown wires) do 'counter clockwise'.

All pinouts are connector side, not print side

The two motors are regular DC motors with on each side an end switch.

I'd like to draft something up with a simple ATMEGA168 and some MOSFETs to drive the motors directly and keep the system calibrated (positionally) using the end stop switches. Using some RS422 receivers we could control the whole lot directly from any UART-capable serial device and set the blinds in any arbitrary position we want. Stoney3K 23:24, 26 November 2011 (CET)