Computer1up worked on a new VM version. You can find it at nasi or 192.168.1.212. It has 2x 1TB Samsung SATA drive in RAID1, 1GB RAM and runs Debian on 2 cores. This VM runs on VMWare ESXi 5.5 on a Dell Poweredge 2950, with besides the 2 Samsung drives, 2x SAS drive for the hypervisor and OS's. Most data from 4.0 was migrated, a little was lost. The virtual machine is migrated from 4.0. Software changes for the VM are minimal. 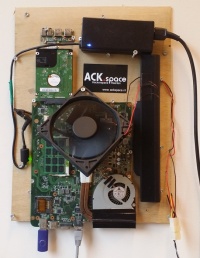 Version 4.0 was implemented by Da Syntax and was virtualized. The VM server shutdown on July 16 2017.

Version 3.0 was created by Danny Witberg

Due to the recent changes in building policies, the practical implementation of our NAS needs updating. New criteria include:

Ingredients of our new NAS is still to be determined. However, some parts can already be named:

Version 2.0 was created by PsychiC

Due to a sudden increase of ACKspace server inventory, we aquired a nice IOmega StorCenter Pro NAS 200rL NAS. This is an 1U rackmounted enclosure for holding up to 4 SATA harddrives. The general plan is to migrate our current 2 drive IBM P4 server based NAS solution to this StorCenter. Supposedly (we haven't turned it on yet) it has a linux based OS, which has some capability for sharingfiles over a network. However, we would need to expand the featurelist by installing our own linux version (FreeNAS or other).

We installed an extra 1GB of DDR ram for increased performance. The CPU is an Celeron D 352, a single core CPU with 64 bit architecture. It should be plenty of power to maintain a decent performance, but we are keeping the possibility of a dual core CPU based NAS open. The HDD connections are on-board, but there is a possibility to install an add-on board to the system. For example a (RAID) harddrive controller with PCI-E port. A proper riser-card should be inserted for this functionality.

- A bunch of SATA harddisks to hold all data. The Storcenter had 4 hotswap SATA bays, which is more than the current limit of 2 drives from the IBM.
- SMB shares over the network. SMB is a sharing protocol for Windows based computers, but it is widely accepted by both Linux and Mac OSes.
- Posibility to download from newsgroups. Idealy, the NAS would have an NZB drop location, which it reads periodically and starts downloading accordingly.
- Seperate (secure) share for netboot data.
- Possibly a section with mirrored data for something you don't want to loose in case of a drive failure. Mainly our NAS does not need any kind of failsafe, due to the nature of the contents, but this would be a nice add-on.
- Fast access. The StorCenter has, just like our current IBM, gigabit connectivity. However, the IBM tops out at around 40MB/s where we hope to get more performace out of the IOmega.
- ??? Anything more?

An implementation of Freenas is chosen again to maintain an easy to use GUI which can be accessed by the intranet. Because the STORcenter does not have connectivity for an extra harddrive besides the 4 hotswap SATA's, the OS is booted from a SANdisk USB stick. Instead of a ZFS drive, there will be chosen to make a big UFS drive for storage.

xopr thinks, the first version was a kind of USB stick or derivative.

Location: hACKspace (against the wall)